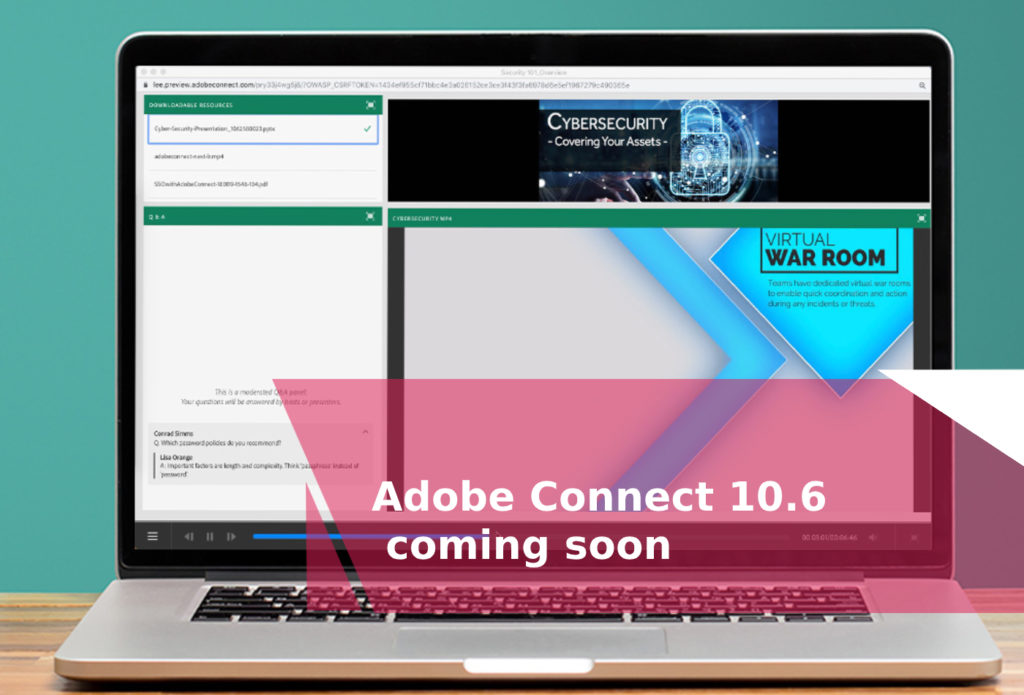 Last October, we announced Adobe Connect 10 onstage at the Adobe Learning Summit. While we’ve been busy replacing Flash objects with HTML in our web app for years now, version 10 introduced the first purely HTML-based meeting client. This new client delivered a fast, modern, and accessible experience to our customers. This summer, we launched Adobe Connect 10.5 which brought some major improvements to the HTML client, including added support for uploading native PowerPoint, PDF, Video and Audio documents, as well as custom apps.

Today, at Adobe Learning Summit 2019, we announced version 10.6 of Adobe Connect, which gives our customers the ability to watch recordings in the HTML client.

We believe this feature will have a tremendously positive impact on our customers by making it easier than ever to play back Adobe Connect recordings. And although we’ve long included the ability to convert your recordings to MP4 videos, HTML offers many benefits over a video version.

— HTML keeps the recordings interactive. Interactive recordings have always been unique to Adobe Connect. Someone watching a recording can still download a file in the file share pod, scroll through chat or Q&A, click on links, or make a share pod full screen. Quizzes and other interactive content created in authoring tools such Adobe Captivate and Presenter also retain their interactivity — enabling a learner to complete the quiz even if watching a recorded version of the the session.
— HTML is more accessible than video. While the MP4 videos created by Adobe Connect can be played on virtually any system using a media player, the reality is that they’re not accessible to applications such as screen readers. — HTML recordings show the content in the same format that was used during the live meeting. That means that text is text and can be selected, copied, or exposed to a screen reader.
— HTML is faster. The new HTML recordings available in 10.6 are using the native Adobe Connect format. Unlike creating an MP4 version, there’s no waiting around. The HTML recording is made available immediately.

What about mobile? We haven’t yet optimized our HTML playback for mobile devices, but that is on the roadmap. With Adobe Connect 10.6, HTML recordings will play back on a mobile device. On larger devices, such as tablets, this works quite well. On smaller devices, it’s clear the experience needs to be properly optimized. Until that time, we won’t have official support for mobile playback, but customers can access this new feature with mobile devices in a “beta mode” capacity.

While we don’t think there are many scenarios where you wouldn’t want HTML recordings, Adobe Connect will respect the meeting options that you have set. If you’ve turned off the HTML client for a specific meeting — requiring the Adobe Connect application, then the recordings associated with that meeting will also open using the desktop application. Recordings associated with rooms that have the HTML client enabled, will open up using the new HTML recording viewer. If your recording is stored in Adobe Connect Central, the viewer will be given the option to use the desktop application or view in HTML.

Adobe Connect 10.6 will begin its rollout in November. We’re excited to make it available.

We use cookies to ensure that we give you the best experience on our website. If you continue to use this site we will assume that you are happy with it.OkLearn more